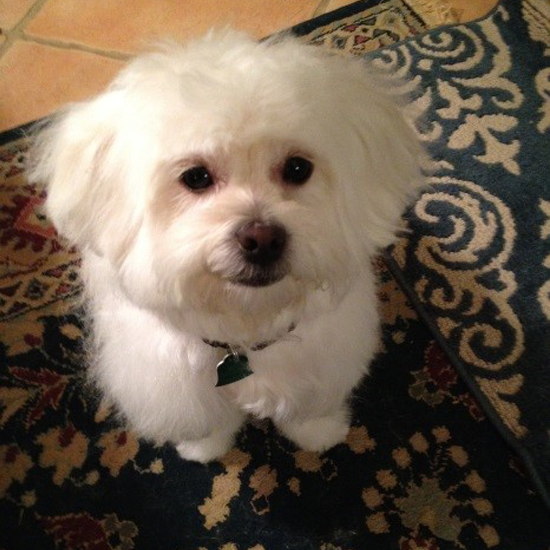 Most families have one member who is considered the leader, the authority figure or some general power-player of the clan. Meet the Head Honcho at our house. (See photo above)

Don’t let those gentle dark eyes fool you. Don’t mistake the soft mop of fur as a carefree approach to life. Don’t think that the sweet looking face is only looking for a snuggle or a game of catch (although those are definitely desired). This little dog is a ten pound power-house of determination and authority. Strong. Capable. Opinionated.

Some leaders cultivate their skills over years; others are born with a commanding spirit. Darci falls into both categories.

She stood apart from others in her litter, overseeing her siblings (and her mother) from a vantage point away from the melee of pee, poop and general chaos. She could deliver a stern look that would wilt any dog or human. While she initiated those skills in her dealings with her birth-pack, she transferred them quickly to us.

As we began our exit from the first visit with her at age 4 weeks (she would not be able to come live with us till she had reached 8 weeks), her disapproval at being left behind was evident and palpable. She glared through the puppy pen as we got in the car. She pushed against the wire fencing to release her from her constraints as we started the engine. No whimpering, no quivering from this young pup. She furrowed her brows, pushed her chest out in a defiant stance and pulled the beginnings of a disapproving bark from her body as we backed out of the driveway. This little pupster was NOT pleased that her new family was leaving.

Initially we had concerns that she might be frightened of the dog we had waiting at home. Her new brother was one hundred thirty pounds of Chow, Rottweiler and German shepherd. Many repair men had refused to set foot in our home until The Beast had been moved to the backyard. Truth be told, he was a gentle giant but his intimidating looks offered a level of home security that we enjoyed.

Once Darci arrived at her new home, we held our breath as we placed the 8 week old, two pound pup onto our kitchen tile floor and introduced her to her brother Angus. But we should have known better. Those tiny paws hit the floor and marched forward with confidence (and a bit of swagger) to touch noses with the towering Angus. In fact, it was Angus’s massive paws that retreated as Darci marched forward and moved in for a snuggle.

Perhaps her tiny stature informs her imperious nature. The French certainly understand this Napoleonic phenomenon. But she is just as comfortable living up to her outward image: sweet and playful, full of kisses and gentleness.

Yet we have learned in the last six years that beneath the sweetness there flows a steely determination. And we all fall into step with the latest edict from The General. In fact, it would not take long before we were to learn how Darci utilizes those skills in a unique and much needed way.

But that is another story, for another day.